Get the Radio Mentoring Guidebook

In Six Months or Less, You Can Have a Career in Sports Radio Broadcasting

You’ve already got much of what you need to succeed in sports broadcasting. Our sister company, the Sportscasters Mentoring Group, the only sports broadcasting school exclusively devoted to training pro athletes to be sportscasters, will deliver the rest … quickly, conveniently, and affordably.

You will learn that:

If you’re a pro athlete, currently or retired, you’ve given your life to sports. At an age when others are in the middle of their careers, you have to change yours. And though there are lots of jobs out there, few beat “the thrill of victory and the agony of defeat,” and the competitive action and team spirit you’ve thrived on till now.

[bctt tweet=”Every athlete, at some point, faces the question of life after sports.”]

Is there a way you can stay in the world of pro sports, even after your playing days are done?

In fact, there is. You can put all those years of on-field experience, inside sports knowledge, and dedication to the game to use in a new role – as a sports broadcaster. 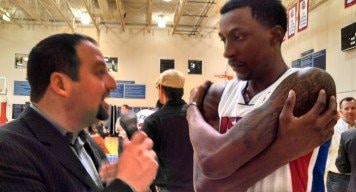 Everyone knows former superstars of sports like Troy Aikman, Phil Sims and Michael Strahan, who now shine in the broadcast booth. And it’s true that the big time network jobs go to those at Hall of Fame levels of achievement.

But don’t for a minute think that those are the only such sportscasting jobs available.

In fact, there are hundreds of sports radio stations nationwide. It’s one of the fastest growing formats in broadcasting. Thousands more sportscaster slots exist in stations with other formats. And they all need to fill these jobs:

You’ve Already Got the Edge

As a pro athlete who knows your sport as only a player can, you’ve already got a powerful edge toward landing these jobs. Why? Because program and hiring directors know that fans love to hear from people who’ve been in the game about what it’s really like out there. So you’ve already got much of what’s needed be hired.